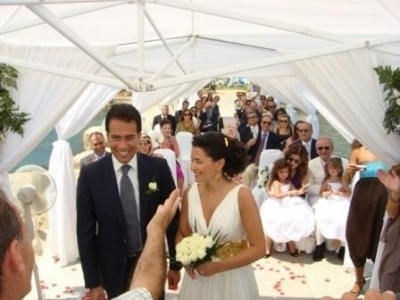 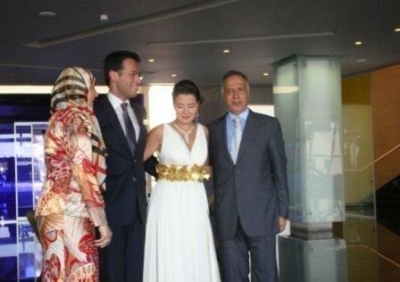 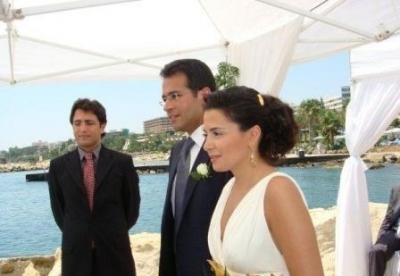 For the Lebanese, Cyprus is Las Vegas. Not for gambling, but … marriage. But while Las Vegas is the destination of choice for Americans looking to get married quickly, for the 400 Lebanese couples who travel to Cyprus every year seeking civil marriages, the decision is more calculated. Indeed, in many ways it is forced on them by Lebanese law itself, which dictates that all wedding ceremonies in Lebanon be religious, creating problems for many mixed couples or those who do not want the church or mosque dictating the rules of their marriage. Partners in mixed couples need to agree on one religion, and one of them has to convert.

Not so long ago, eloping in Cyprus took courage, as couples returning to Lebanon faced strong disapproval from a thoroughly sectarian society. “Some don’t accept it even now,” says 24-year-old Hanadi Sheikh, who recently got married in Nicosia. “They say that if it is not in a church or mosque, it is not blessed. But since even famous people did this, we feel it is not a taboo anymore. I heard about three or four people who got married in Cyprus last week.”

Among the most famous couples to get married in Cyprus as of late are MP Nayla Tueni and LBC talk show host Malik Maktabi, who recently enjoyed a relaxed civil ceremony, and released the pictures to the press.

If you arrange it by yourself …

It is not a big deal, Sheikh says. She got married in Nicosia and she didn’t hire a lawyer to take care of all the papers. It was too expensive. “I’m not a religious person so why should I go to the mosque?” she says. Hanadi made a few phone calls and made it work all by herself.  First, she went to the Cypriot Embassy with the identification documents of the entire family, translated into English. “You submit the papers to the Civil Marriage Office, and in three days you get the permission and the visa.”

The Civil Marriage Office in the Cypriot Consulate is staffed by two embassy employees who know just about everything about marriage legislation and guide couples through the paperwork, according to the consul, Nicholas Haralambous. “We try to offer them all the assistance; we have brochures, they can find contact numbers,” he says, estimating  that so far this year over 200 couples have applied for the marriage permit, a number he expects to double by December.

But before going to Cyprus to say “I do,” a couple had to make an appointment at a Cypriot municipality. Sheikh and her husband then flew to Nicosia, submitted the relevant documents and scheduled their wedding for the next day. The ceremony itself took 15 minutes.

Then the boring paperwork started: they went to the Ministry of Foreign Affairs in Nicosia, then to the Lebanese Embassy, where they got a registration number that they were supposed to submit to the Ministry of Foreign Affairs in Beirut. Sheikh says they did so two months ago, but the elections and political stalemate over the formation of the new cabinet kept the clerks from registering their marriage.

As civil marriage becomes more popular, businesses are coming up with ways to profit from it. This is how the “Cyprus wedding package” came into being, with its slogan “Just say I do… we’ll do the rest.”  The “rest” costs between $1,200 and $1,900.

In some ways it is like getting married in the express lane. Departure from Beirut at 7:15 a.m., arrival at 8 a.m., a meeting with the agency representative, flowers for the bride, transfer to Town Hall for completion of the wedding ceremony. Then transfer to Nicosia for legalization of the marriage certificate at the Ministry of Foreign Affairs and the Lebanese Embassy. It’s back to the hotel by 12.30, then a free afternoon, overnight at a 5-star hotel, departure to Beirut the following afternoon.

The price might seem a bit much, but it includes all the paperwork needed in Cyprus, transportation costs, translations, assistance from a specialized employee and even witnesses.

Some agencies, such as Aeolos, use the term “Honeymoon package,” but the services are the same: witnesses, wedding license, all transfers from the airport, town hall and hotel, wedding night at a 4-star hotel, paperwork and plane tickets. The couple only has to take care of getting the permission from the Embassy of Cyprus in Lebanon.

Nadia Travel is the only agency that went for the name “Civil Marriage Package.” It was a simple marketing move, says Ghenady Ragi, the Bulgarian-Lebanese owner, who started the offer three years ago.

“I was a witness at a friend’s marriage in Cyprus,” he says. “When you don’t know anything about it, it’s pretty difficult. We found out you cannot do it in one day. So I said why not? I had the agency, why not offer civil marriage services?”

At first people were weary of the new tourism package, but now he says he gets 60-70 calls about it a day and sells some 300 packages a year. He expects a 10-20% increase in coming years.

“It’s a great business idea,” Ragi says. “Civil marriage packages are my most requested product, even more than my offers for Bulgaria. I am planning to expand actually. I’ve got offers for civil marriage in Malta.”