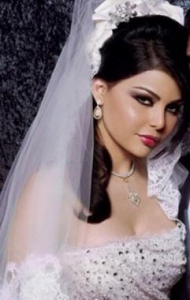 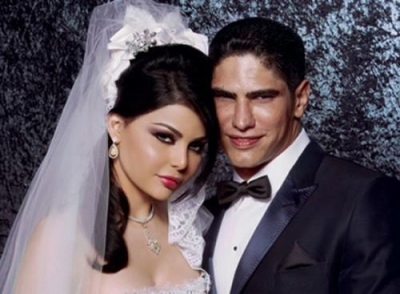 Haifa Wehbe tied the knot on Friday and has entered The Golden Cage with Ahmad Abu Hashimeh.
The wedding was a star-studded one with attendees from around the Arab music & movie world.
Famous people were there to share the happiness with Haifa like Ahlam, Ragheb Alamah, Nawal Al Zoghbi, Shireen Abdel Wahab & Najwa Karam.
Assalah couldn't be there, because she had previous engagements and Amr Diab was MIA for an unknown reason!

It was reported that the wedding ceremony, which was held at the prestigious BIEL Center in Beirut, will be broadcast LIVE, but that turned out to be just one of those rumors!
Unfortunately, there were no press access was given to any media outlet to take photos of the wedding and the bride and groom, but Haifa will be considering selling the photos to one magazine exclusively.
The race for publishing rights is on and the price will surely be high!
Which lucky magazine will win the right of publishing the photos? We still don't know!
So, the only photo of Haifa and her hubby Ahmad is the one above and we'll be on our toes awaiting the actual wedding photos.

Back to the wedding details, Haifa entered and exited the wedding hall through a secret way, in order to dodge the hoards of paparazzi who were drooling over a glimpse of the bride!
Haifa and Ahmad entered the wedding hall accompanied by the famous music of 'Mission Impossible' ! Strange choice!
The it was a traditional 'Zaffeh' accompanied by the song 'Ya Salat Ezzine'.
Haifa strutted her curvy figure in two wedding dresses, one from Dolce & Gabbana and the other from Lebanese designer, Fouad Sarkis.

After the bash, which lasted until the wee hours of the morning, Haifa and her groom jetted off to the Italian island of Capri for their honeymoon.